Welcome to the Sarkari Admit Card section of MySarkariNaukri website. On this page you will find the latest admit cards of Institute of Forest Biodiversity (IFB), Hyderabad. All information about Sarkari result and Rojgar results can be found here..

There are no admit card details at the moment. Please check back later. 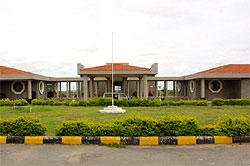 The Forest Research Centre (FRC), Hyderabad was established in the year 1997 under the administrative control of Institute of Wood Science and Technology (IWST), Bangalore . The centre was initially known as 'Advanced Centre for Biotechnology and Mangrove Forests'. The was upgraded as the Institute of Forest Biodiversity (IFB) during December 2012. The jurisdiction of the institute is the Eastern Ghats for Forest Biodiversity and Telangana, Andhra Pradesh, Maharashtra and Goa.

INSTITUTE OF FOREST BIODIVERSITY (IFB) located at Dulapally, Hyderabad was initially started as â€œAdvanced Centre for Biotechnology and Mangrove Forestsâ€ during July 1997 and later on renamed as â€œForest Research Centre, Hyderabadâ€ on 9th July, 1997. In 2012 the centre was upgraded to Institute and renamed as â€œInstitute of Forest Biodiversityâ€. The institute is sprawled over 100 acres campus with well-equipped research infrastructure. Besides the main campus, the institute has one field station at Mulugu and one Forest Research Centre for Coastal Ecosystem at Visakhapatnam.
Official Address:
Dulapally, Kompally (SO) Hyderabad, Telangana 500100
Phone: 0091-40-65268614; 66309501 (O), 9640218326
Fax: 0091-40-66309521
Website: http://ifb.icfre.gov.in/